Heroes from across multiple genres gather in a 2D platform and battle to the death. If you have played Super Smash Bros then you can probably pick up Brawlhalla and feel right at home. There are many different heroes ranging from a staff wielding antarctic princess to a boxing werewolf, and you play against the computer or other online players in multiple game modes. The game is free to play with a limited number of characters but more can be unlocked by obtaining coins through matches. You may also pay $20.00 to unlock all current and future legends (the term for playable characters). One of the best elements of Brawlhalla is the ease of playing with friends locally, online, and in teams. Oh yeah, and the game isn’t pay to win like so many games these days.

The basic core mechanics of Brawlhalla are similar to Super Smash Bros and just as smooth and silky. Let me break it down. You can jump multiple times, wall jump, use a light and heavy attack, dodge, and throw weapons. Each character has 2 different weapons and their own signature moves to keep things interesting. The health meter is less intuitive than Super Smash Bros since there is no percentage number. The bar goes from white, to yellow, to dark red and all spectrums in between. The darker the red, the easier a character is to launch off the map. Items are pretty limited, and there is no way to recover health (so don’t get hit!). Overall the game mechanics are implemented beautifully and feel very responsive.

As an indie battle royale game I would say the graphics look pretty solid. Characters have many different color variations and skins that change their appearance. The maps you brawl on have cool scenery and there are many variations of weapons to make your character look like a boss (of course you normally have to buy these variations). Sound effects seem a little mild and dissatisfying however, and can sometimes leave you wondering if you had even inflected any damage on your opponent. Some attacks have loud unique sounds when they are activated, yet when they hit an opponent you can hardly even hear or see the contact. 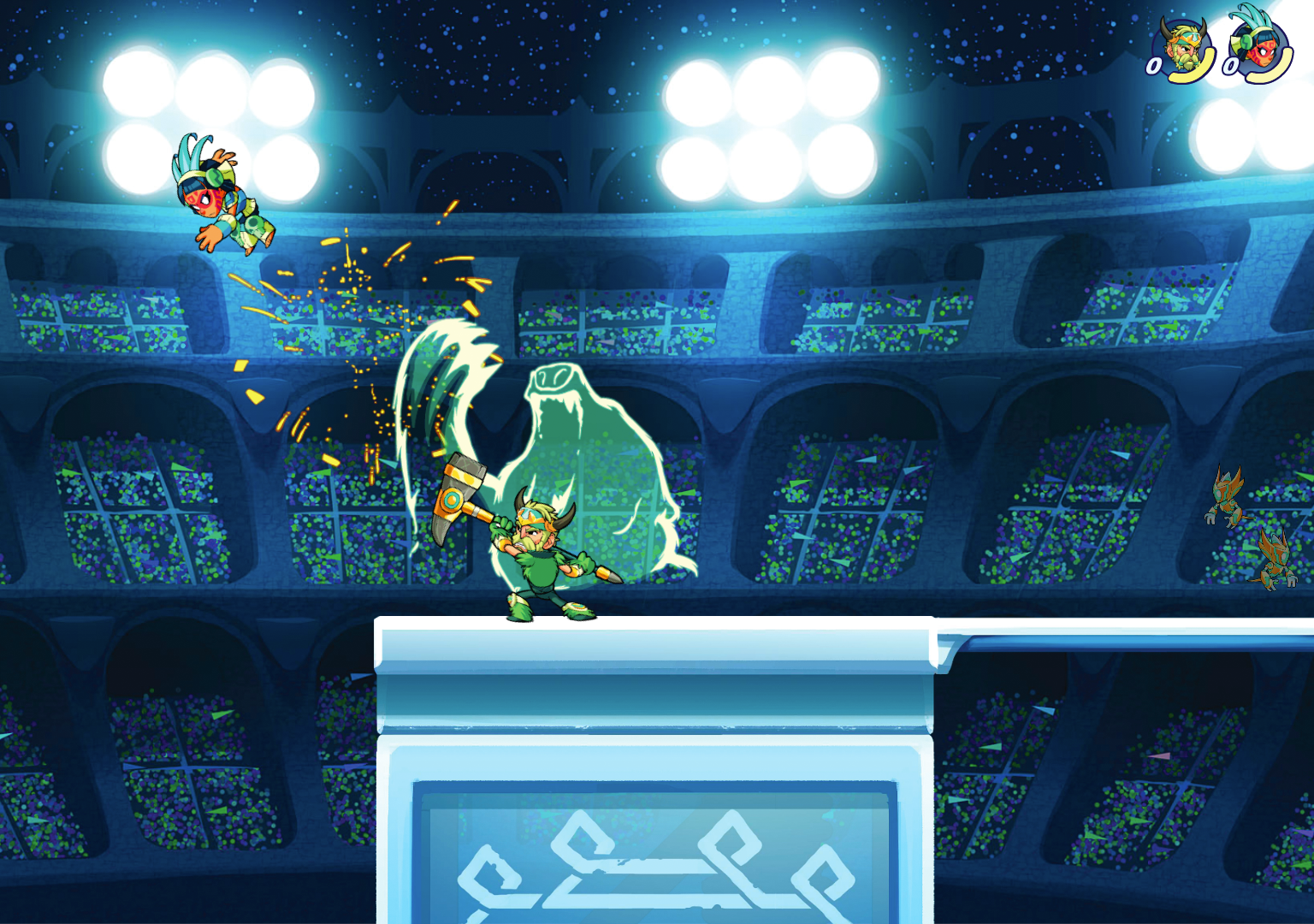 Multiplayer is by far the greatest part of Brawlhalla but somehow seems to fudge it up with their slow servers. I’ll go through all multiplayer modes. You can play up to 4 people on a single system in a local match. This is consistent with other arena type fighting games, however Brawlhalla takes multiplayer 3 steps further. You can join matches with other online players with a matchmaking system and even bring along a friend. You may play a ranked mode with 1v1 or 2v2 with a partner. Furthermore, you can bring along a party of 4 players and join a custom room where you battle against another party of 4 in a huge crazy battle royale. There are so many possibilities and match up options and this makes an awesome party game. Hopefully Brawlhalla will eventually get their servers straightened out and we can enjoy all this multiplayer goodness even more!

Over the past couple months I have grown pretty attached to this casual brawling game. It’s a game that you can pick up, play a match, and then turn off in only a few minutes. You can fit in a match while netflix is on pause and your partner goes to the bathroom, or to fill that awkward 7 minute gap before you have to leave for work/school. It feels good to wreck someone in a 1v1 ranked match and then log off… but on the flip side it makes you pretty frustrated to lose 5 matches in a row, throw your controller onto the couch, and rage quit (maybe I just have anger issues).

Brawlhalla has also thrived in the variety of game modes. You can play offline with friends (or vs the computer), online with free for all, strikeout (3 lifes with 3 different legends), ranked 1v1 and 2v2, experimental (essentially you are testing maps for the developers), and even join unique game rooms with other online players. On occasion there are also featured game modes where you can throw snowballs, go invisible, or other wacky twists to the traditional brawl. I normally go with free for all or ranked 1v1, but when I’m playing with friends and having a couple drinks it’s fun to experiment and just have fun.

As aforementioned, all legends have 2 weapons, but there are only a few types of weapons that all legends have a mix of: sword, axe, bow, fist, rocket lance, spear/staff, guns, hammer, scythe, katars, and cannon. Since there are over 30 legends you can sometimes learn one legends moveset and pick up another legend with the same weapon with greater ease. Don’t worry though, even the same kind of weapon performs differently in the hands of a different legend. If you take a really close look you can see a lot of the legends are similar to League of Legend characters… and there are a couple other similarities as well.

Each legend has a mix of 4 stats including: attack power, attack speed/agility, defense, and move speed. As you level up a legend you will unlock stances that can slightly alter their stats (you will also unlock different color variations). With so many different stats, weapons, signature moves, and stances, the game has great variety, however it also allows some legends to become unbalanced or overpowered. I’ll let you figure out the meta after you pick up this free title and give it a try.

As all games do (especially indie games), Brawlhalla comes with a few things that can be improved. Some, I have already mentioned so I’ll make a simple list.

Brawlhalla is a very mechanically sound game that has reached new frontiers in multiplayer brawling, however it seems that there are some issues that can take a lot of the fun out for some people. Not everyone wants to spend real money on making their legend look cool, but good thing there are ways to change your color and unlock special holiday colors without having to pay! Overall I give Brawlhalla 3.5 stars. It’s a great party game but with the lack of unlocks and server issues, it will most likely die off in a few years from now.

Be the first to comment on "Brawlhalla – Super Smash Bros and LOL Combined!"